"always" is the BEST5 song from the 6th Cinderella Girl General Election. The original album version was released in December 13, 2017 in the album THE IDOLM@STER CINDERELLA MASTER 恋が咲く季節. During the Cinderella Girls 10th Anniversary Tour Finale @ Belluna Dome, it was revealed that this song is the 3rd most voted song in the "My Best Cinderella Songs" voting event that took place late 2021.

The song always has lyrics written by and composed by Maiko Fujita. A singer-songwriter who also has full fledged touring career. Her contributions to Cinderella Girls includes other notable songs like "in fact" and "if". In charge of the arrangement is Takizawa Shunsuke, then man who's played a major part in many iconic Cinderella Girls songs. 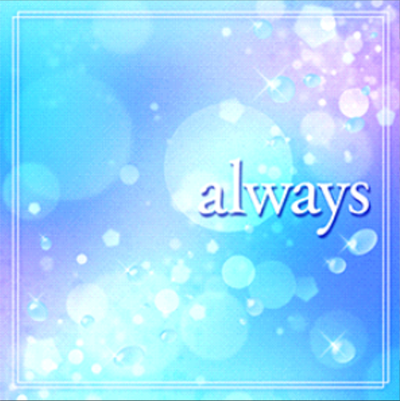 The lyrics of always is generally quite simple. Even if you were just starting to learn vocabulary through Japanese song lyrics, a lot of the words you encounter here are very common. That doesn't mean that the song is bad. Making an attempt to show off how flamboyant your vocabulary is does not necessitate a good piece of literature.

Standard fare: Translations are not meant to be perfect English and comprehensible sentences to give the reader who may not understand Japanese a chance to derive meaning from the original literature with the original contextual clues, instead of having someone else already making that interpretation for you. Read the discussion under each section for some suggestion on the interpretations.

The song starts by establishing this basic pattern that will be used throughout.
〇〇〇〇日もあった
だけど〇〇〇〇
[some kind of] day also existed (inanimate)
but .....

This is the simple pattern the song uses to establish some fact. In this section it's about how you as the producer helped them (the idol) through their sad times.

There were days where I couldn't walk as well
But your voice
[I] was able to hear [it]. I could hear it you know

Being unable to walk is a bit general of a concept. Is it literal or metaphorical? Did they get injured, or did they experience a major setback? Chances are it's probably a bit of both. For Cinderella to make her way back to the ball the journey was never going to be easy, but she heard your voice. Perhaps she did not acknowledge it, but she heard it nonetheless. Your voice spurred them through their hardest time.

Like the warmth and gentleness of the spring sunlight filtering through the trees
Like the refreshing summer breeze, [you] gave me strength
In the midst of changing times
There was something that was unchanging

This section is the idol describing you, the producer. Or at least thats what we assume. The subject for the whole song is ambiguous really, and that's part of the beauty of it. You can think about how the lyrics of the song subtly change meaning from different perspectives. For example, try to contrast the producer supporting them from the background vs a fan who's been cheering them on all the time.

Like a warmth of the sun in spring or a refreshing wind in the hot summer. In the changing times you were their one constant. You were there when they needed you to give them strength, the strength to carry on.

Always, always, always
You have
given me the gift of looking out for me haven't you?
For giving me the chance to meet
Thank you

The chorus section exists to explain the previous sections for the most part. Throughout the changing times, you've always been looking after them. More than just a repetition of the previous part, it is the acknowledgement of your contribution to your idol's success. Your idol is grateful to have met with you. And that applies regardless of who sings the song, be it the girls in the election or maybe it's just everyone whenever JUNGO chooses mass murder.

Always, always, always
I have
been constantly loved by you haven't I?
For giving the chance to be found
Thank you

Sometimes you need to remember that this is a franchise with 190 idols . From this pile of faces you've chosen your idol(s) that you wanted to produce. You've shown them your love in your own special way.

There were days where [my] heart wavered as well
But you, to make up for it
Believed in me didn't you?

Just like at the start, we've returned to the pattern again. During the days where your idol lacked confidence, you were the one who believed in them.

There were days where [I] hid my weakness as well
But you
gave me the gift of being understood completely didn't you?

For some characters this is far more apparent than others. For some of them, hiding their weaknesses is intrinsically a major part of their character. For others, perhaps this is not as common. Yet in difficult times, sometimes pretending everything is okay is a coping mechanism. During these times, you showed understanding. Some studies believe that being understood is the most important human need. That's why empathy is so powerful.

Like the autumn sky, somehow becoming nostalgic
Like the dandelions that overcome the winter, with that strength
From here on together
If you will walk together with me, then we can go anywhere/to the ends of the earth

During the last prechorus we went through spring and summer, now we have autumn and winter. While the whole seasons series was a hot topic during this period of time, in general whenever a song enumerates seasons, there is a strong association between not just the themes that each seasons bring, but the idea of passage of time. Through the seasons, you were there for them, you gave them strength. And now, together they feel like any obstacle can be overcome.

Always, always, always
I have
my eyes fixed on you all this time, that's why
The thing of being able to meet you
is a treasure

So something about the meeting of idols that I did not fully cover earlier. Consider for a moment how you met your idol. What would you define it as? Is it their scouting in their memorial commu 1? Is it the first time you decided that they are the one you wanted? Or perhaps even more abstractly, is it the time you first get to see them on the stage performing this song, because as a result of this song's existence after all this time, they've finally become voiced?

Always, always, always
You have
let me shined you know?
To notice this, this feeling
is a treasure

Throughout your adventures with your idol, you have always strove to let them be at their best. To let them shine wherever their job takes them. Or perhaps more than that, to let them shine means that you've helped them triumph everyone else to arrive in the top 5. This feeling of being supported by you is their prized possession.

Always, always, always
You have
given me the gift of looking out for me haven't you?
For giving me the chance to meet
Thank you

There is no bridge in this song. Instead the strings and wind instruments kick into overdrive and we repeat the first chorus again. Once more with feeling, as they say. Also even with the lack of a bridge after the 2nd chorus, this song is over 5 minutes long and is not anywhere close to the shortest full length song in the series (Joker at 3:19)

Always, always, always
I have
been constantly loved by you haven't I?
For giving the chance to be found
Thank you

While we're going through the repeats, it is a great reminder of how personal this song is. The lyrics speak directly to the listener, and the listener is the direct target audience for the words, unlike in most love songs where it may not directly translate into a tangible, easily graspable feeling. The simplicity in the choice of words is part of what makes this song so extremely relatable.

For giving me the gift of choosing me
Thank you

Perhaps after all this time you've forgotten the reason this song exists. Well, this part is here to remind you. In the original version of the song, this is sung by the BEST5 idols, the top 5 most voted idols of the election for that year. This whole song came to be what it is, because you chose them for it. For some, they could only be voiced because you chose them for this. This is the most direct acknowledgement of the contributions of you, the producer to the idols that perform the song.

The song always is a powerful 4th wall twist on how the election works and what it takes to get the idols to the point of being able to be featured in this song. That is one of its most unique charms. By itself it is a very thankful and grateful song, capturing the idea of an idol showing appreciation for the support of the producer and fans. Its elegance in simplicity is one of its best weapons.

But as we also alluded to earlier, that is not necessarily the only meaning of the song. The simplicity and ambiguity of the song make it possible to be interpreted in different contexts and still remain as real and sensible as it is in its original context as an election song.

I noticed a lot of the My Best Cinderella Songs vote results seems to be somewhat skewed by the influence of live performances of a particular song. This makes me wonder how much of 6th live Nagoya influenced the outcome. Full member always was regarded as quite the significant mass murder event back in the days and is unsurprisingly one of the most notable moments from that live.

That is of course not saying that this song does not deserve its spot. Far from it, I believe the always is one of the greatest BEST5 songs ever composed, and is most definitely the best lyrics wise.

If you would like to read more about the rank 2 "My Best Cinderella Songs" piece, I happen to have already written something about it. It's quite interesting than song 2 and 3 are both more somber emotional slow pieces. I recommend checking it out here if you haven't. You can find it right here.

It also seems like only one song in the top 3 is missing a writeup. Maybe it is finally time to look at my favorite song in the whole game...

Poor seasons series, cursed to never get finished because I keep diverting my attention.

Did you find the article interesting or helpful?
You can help keep this website running by becoming a patron or making a one time contribution with the links at the bottom of the page.
Become a Patron!

Thank you for helping keep aidoru.info ad free for everyone.